Now HERE is something COOL!!!

Okay, so last night, I get to TPF and Matt and I do the "where do you want to go?...I don't know... where do YOU want to go???" Song and dance when Matt says "have you ever been to Sebring?"

I hadn't, so that was the destination.

Matt flew over there and it was only about a 45 minute flight. We land on RWY 36 and are taxiing up to the FBO when I see this huge cat sitting on the tarmac by the FBO, not bothered by the plane and I say "hey look at that huge cat."

Now, I'm thinking... "man, Matt sure is excited about this big cat"

, so I look at him and he's not looking at the cat... he's looking at something else.

I look at the letters on the side of her "ADF" and I say "hey, I think that's the Memphis Belle!"

But, then we both start talking about it and decide no, it's not the Memphis Belle because that's a static display in a museum......isn't it???

Line Guy: Sure, no problem. Just don't open it up and get inside. Interesting story. It was on it's way to Avon Park (which is only about 10 miles away) and it lost an engine, declared an emergency and landed here. They've pulled an engine and here it sits until it's repaired."

I think we both about wet ourselves!!!

We jump out and immediately start walking around her. MAN was that AWESOME!!!

Sure enough, her left inboard engine is off.

We both decide we "need" to touch the nose art, and discover to do so, we're going to have to jump.

So, Matt and I leave and go get something to eat at the "Sebring Diner" (great food), then as we head back, we pick up a disposible camera at a gas station.

It was 7:15 p.m. and dark as pitch when we got back and there were NO lights anywhere near the Memphis Belle, so I put the brights from the crew car on her and we commenced to taking photo after photo.

Once I get them developed, I'll post them (if they turn out, that is).

We talked about it off and on during the flight home. What I got a kick out of was Matt's enthusiasm over mine. Matt is 17 and the boy knows his aviation!

He said at one point "You KNOW neither one of us will ever get this chance again EVER in our lives!!! This is AWESOME!!! I thought I'd never get to see the Memphis Belle!!"

Wow that really is pertty cool!

I've always wanted to see it myself (since seeing the movie, that is.

It'll be at the Kitty Hawk thingamabob in December (with a little luck....I'm guessing B-17 engines don't grow on trees nowadays.

There's a tour schedule on line, but it only goes through this year.

Staff member
I got to sit in the B-17 "Sentinmental Journey" back in the early 1990's. Man, talk about a beer can!

Man, what an awesome experience! They're incredible, beautiful beasts up close, aren't they?

If specified, this will replace the title that

I watched "Sentimental Journey" doing short hops all day Sunday while I washed the bugs off the Apache. Falcon is a really cool field with the CAF wing based there. There's always some old Warbird flying in or out. I've done a runup next to the P-51 based there (it gives rides for I think $500 a pop - as does Sentimental Journey) a couple of times and have landed behind him several times. It's truly awesome to turn final to see a P-51 over the numbers ahead of you!

Although, since Champlin has shut-down it's quieted down some.

Great story R2F ... it's one of those things that makes you go wow.

I got to sit in "Nine O Nine" back when I was around 10 years old, which was an awesome experience!

Couple months ago we landed at MKE, and taxiing off see a B-17 parked on the cargo ramp near some FedEx Caravans. I see the tail ID (DF-A I believe?) and recognize it as the Memphis Belle! I was obviously more excited than my captain, but I thought it was cool nonetheless. 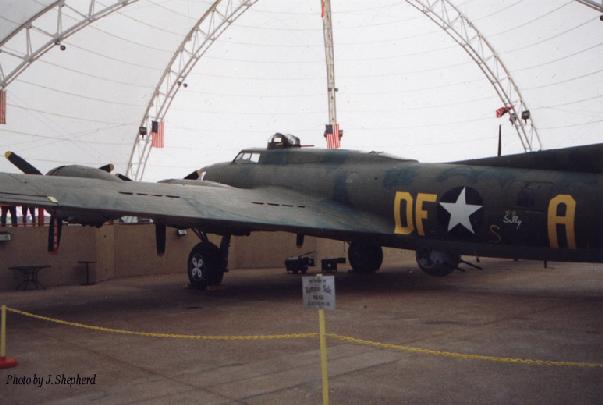 Don't know why that is though.
P

How Cool! I'm watching the Memphis Belle documentary and came across this post. Can't wait to see your pics!

Hey R2F, where is that bottom picture from? I swear I have seen that before. Is that in Memphis? Did I actually see the plane when I was wandering drunk through the streets of that fine town?

Yessir. That's when the Belle was on static display before she was refurbished.

So, you probably did stumble by her.

I think I threw up nearby but it is kinda foggy.

What a great town that is for anyone who hasn't been there.

I'm glad to know I'm not the only one excited about being in her presence. Well last month on a tour of FLA. flight schools I decided to drive from Vero to Whittham field for an airshow(can't get enough!) and as I'm cruising down the static line I see this brown beast and as I come closer, sure enough, it's the Memphis Belle! THE MEMPHIS BELLE!

I was feeling full of excited reverence, wow, THE MEMPHIS BELLE! So with alsmost religious reverence I reach out and touch her, wow, the real Memphis Belle. I spent a good bit of time, talking to her crew and after buying a cool yellow Belle t-shirt I got to climb up her forward hatch and go in. The hatch leads up just aft of the cockpit and wow, there she is, the center that guided her down the road to history. All original equipment, yokes etc. except for modern radios mounted center above. Then I'm stepping down to a lower level to the bomb-bay which has a 8" wide walkway to cross over to the next area which is the radio room complete with original OLD radios etc. After that is the area where the two side mounted left/right machine guns are mounted. Boy to grab those guns and swivel around and look out the windows like the gunners did so many years ago and imagine what it must have been like was eery. I peered through a top hatch to get a view fore and aft of the ship. The underside gunners turret was closed so I couldn't get into that but the hatch for was small. One thing that struck me from the inside was how narrow she is! From the outside she's a large ship but on the inside from wall to wall is only about 7 or 8 feet. I don't know the actual measurement but she just seems so narrow inside.

I took a slew of still shots on my digital cam which I downloaded into my pc. I also took a load of camcorder footage as well. I understand to post photos from my pc to JC I need to send them somewhere online, but really don't know the way to get them posted to JC to share. Anyone want to help me out here with the steps to do this? I'd love to share them with you all.

Needless to say the experience as a whole was very special for me, one that I'll always remember. A time to reflect solemly on the sacrifices made by those those in the military.

To walk and touch a piece of history, special indeed.

Ah, I have a couple of sweet B-17 pics that I took back in Sept. I was out instructing and one was coming in for the airports annual Aviation Day thing. I got a decent pic of it on final, and another just as it touched down (I was standing in the grass adjacent to the runway). I would post them, but I can't seem host them without that damn red X showing up.

Mr. Sky King,
I was working in our flight school's booth at the Witham Field airshow. Pretty cool airshow for a small town airport eh? Did you see the that B-16's landing gear door get blown off when it flew too close the the pyrotecnics??

Stan
Hey I know how you felt. A few months ago I had a day trip to MQY Smyrna, TN and they had a B-17 and a B-24 on the ramp. I was more than happy to pay the $8 for the tour. I climbed all over those bad boys. As fate would have it I knew the B-24 pilot and got alot of extra attention from him as we toured the planes. If you ever get to sit in the cockpit of those airplanes take a look at the seat design ... they are built to accomodate the big balls of the men who flew them.

You are right ... that is what it is all about.

She was there on a CC I did a while ago! By the way the aviation center there is really nice isn't it? I love Sebring but they need to finish the construction they are doin there!

I got to see the Memphis Belle when I was pretty young (about 7) over at PDK. I wish I was older, its an experiance I dont think you can really appreciate at that age.
You must log in or register to reply here.
Share:
Facebook Twitter Reddit Tumblr Email Link
Top