Departed KFFZ yesterday afternoon headed for Winslow but never made it to Payson. A very close friend of mine was on board along with his student, prayers are greatly appreciated. Lets all hope for a safe recovery!
J

Sorry to hear. Hope they find everyone ok!!!

Hope they find them.

Staff member
I've been following the story locally, so far, no word.
J

A plane that appeared to have smashed into a cliff near Payson may be the Piper single-engine aircraft that went missing from Mesa's Falcon Field Airport on Thursday.

Ian Gregor, a spokesman for the Federal Aviation Administration's Western-Pacific Region, said Saturday that the Civil Air Patrol spotted the wreckage from the air.

FAA and Gila County Sheriff's Office officials said the wreckage, which is about 15 miles northwest of Payson, appears to be "fresh."

Air patrol officials reported that the plane "impacted a cliff wall," Gregor said in an email. It's unclear if there are any survivors.

Melissa Kennedy, a dispatcher with the Gila County Sheriff's Office substation in Payson, said the wreckage is located in remote area at the upper end of a canyon that Fossil Creek runs through, which she believes is in the Tonto National Forest.

Ground crews are hiking into the area, which would take most of the day, she said. She said they expected to reach the site of the wreck by evening.

Gregor confirmed reports that some of the three passengers are from the Netherlands, but authorities have not released names.

Company spokeswoman Nathalie Bourque, who flew to Arizona Saturday morning, said she would have no new information until sometime on Saturday afternoon.

"As you can imagine these are difficult times," she said. "We're all trying to do our best."

Allen Kenitzer, an FAA spokesman, said the pilot planned to stop in Payson before landing in Winslow at 4:20 p.m.

Civil Air Patrol Col. Bob Ditch said five aircraft had been searching for the plane. Crews were scouring the area where where the plane was last tracked on radar and where cell phone records last placed the passenger's phones.

Ditch said Friday search flights over the area had not been able to pick up any emergency locator beacon.

Oh dear. Keeping faith that they will find everyone safe. (((OP)))


​
Officials confirmed that a crashed airplane found near Strawberry is the flight reported missing Thursday from a Mesa airport.
An Arizona Department of Public Safety helicopter found the wreckage Saturday morning in Calf Pen Canyon, northwest of Strawberry, said Greg Roybal, spokesman for the Arizona Division of Emergency Management.
The plane had three occupants but officials are still investigating whether the three bodies match the identities of the flight's missing occupants. Taylor Bennell, a flight instructor, was on the plane with Lucas Westenberg, a student pilot, and another passenger, Rob Van Den Heuvel.
Gila County Sheriff Department deputies discovered the three bodies at the crash site in a remote, rugged area.
The 1999 Piper Archer had been missing since Thursday evening. It was owned by CAE Global Academy in Mesa. The plane was on a training flight that was scheduled to fly to Winslow and Payson before returning to Falcon Field in Mesa.

Thanks to all on the forum who have been thinking and praying for these guys. Taylor was a good friend of mine along with Cass. Prayers out to family and friends of all involved. Godspeed pilots
J

Says the other two were a Netherlands student and a KLM instructor.......


Sad and prayers for all!

Sorry for your loss, guys.

Thank you all for the support and kind words. Taylor and I basically got our ratings together as well as spent over 50 hours crammed in a Seminole chasing that precious multi time. Not to mention flight team, many Vegas adventures, and countless nights scammin at the bars... Pilot980; you were a great pilot and a true friend, words can't describe how much you will be missed. 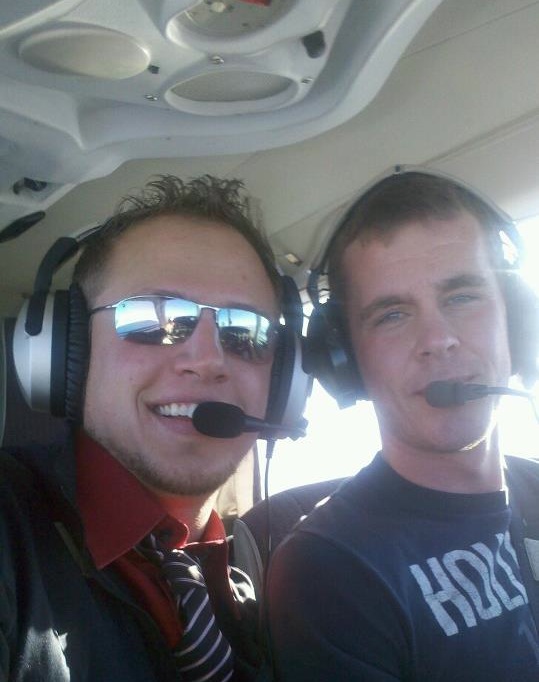 I am so very sorry for you loss honey. He was lucky to have a great friend. You are in all of our thoughts tonight.

So sorry to hear this.

So sad to hear this.... certainly praying for all close to the situation.

May they rest in peace.