Continental 737 Off Runway In DEN

Hope everyone is ok.
V

King said people were hurt but none of the injuries was serious. The aircraft was a 737 with 107 passengers and five crew members abroad. Crew members activated the evacuation chutes and all passengers made it off the plane safely, airport officials said.
Click to expand...


I hate to hear about these things, but at least there were no serious injuries.

Hope everyone comes out of it ok. Those are the times you are really thankful that we have great FAs to evacuate and firefighters to help out.

Looks like there was a 31 kt crosswind at the time.

DENVER – A Continental Airlines jet taking off from Denver veered off the runway into a ravine Saturday night, forcing passengers to evacuate on emergency slides as the plane burned, officials said. Nearly 40 people suffered injuries ranging from broken bones to bumps and bruises.
Denver Fire Department Division Chief Patrick Hynes said a fire associated with the accident burned the entire right side of the plane. Melted plastic from the overhead compartments dripped onto the seats down below, he said. It was unknown when or how the fire started.
Firefighters arriving on the scene described it as "surreal." "Much like a movie, some people coming out of the smoke and up the hill," Hynes said.
Ground crews put out the fire quickly, said airport spokesman Jeff Green. The 112 people on board made it out on through slides on the Boeing 737.
Click to expand...

I hope none of the injuries were serious.
P

After reading and watching the news cast, it appears they got airborne only to come back down, wonder what happened? Good job on the crew for getting everyone out safe.

....Many of the injuries were the result of a emergency exit chute on the left side of the plane, which was about 6 feet short of the ground, according to people who talked to Call 7 Investigator Tony Kovaleski. Passengers were rapidly sliding down the chute, but when the reached the end of it, they fell another six feet before hitting the ground. There were many broken bones and bruises as a result of the escape.....
Click to expand...

I would think the chutes on the right side of the plane would have the additional 6 foot drop, seeing as how the airplane was listing to the left since the left engine is no longer on the airplane. 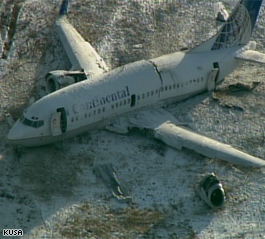 Again, with the winter fronts that have been pounding the US we are going to see more of these incidents.

Good job to the flight and cabin crew in getting everyone off safe.

My thoughts and prayers to all of you.

As the investigation begins, please reserve judgement until the facts are in.

Yup wtg continental crew; admiral job by everyone involved. It gives a good chance to reflect how worse it could of really been without the training and quickness of the crew.

My thoughts are with the families in Houston waiting to hear from their loved ones.

Pilot was on msnbc earlier saying weather at takeoff was fairly tame and the wind while at 25-30 mph was within SOP for a close to direct headwind.

But you are right lets wait for the facts to come in from NTSB.

I'm assuming the snow on top wasnt there when they attempted the takeoff?

I'd guess not. And some of that may be foam your are seeing.
V

phoenix 23684 said:
Good job on the crew for getting everyone out safe.
Click to expand...

Amen. And this is precisely why GOOD, well trained flight attendents are worth their weight in gold.

When did Continental start flying the 737-700? Or is that an older series with winglets?

It's a -500 with winglets. And an uncomfortable 2nd flightdeck jumpseat.

SeanD said:
When did Continental start flying the 737-700? Or is that an older series with winglets?
Click to expand...

CO has been flying the -700 for years. It's pretty rare to see them out west.
B

Wow! Great job to the crew. I landed at DEN yesterday around 11am and the winds were a little spicy at the time of the landing on rwy 34L 300@25.

RWH1986 said:
I'm assuming the snow on top wasnt there when they attempted the takeoff?
Click to expand...

you assume correct. any snow on the fuselage would have been blown from the field onto the a/c overnight. yesterday was clear and cold, no precip.
You must log in or register to reply here.
Share:
Facebook Twitter Reddit Tumblr Email Link
Top