There's a Beavis and Butthead reference in here somewhere.

WASHINGTON (CNN) -- A drunk passenger who tried to set the curtains of a Boeing 767 on fire during a trans-Atlantic flight is in custody in Vienna, Austria, the Transportation Security Administration said Thursday. 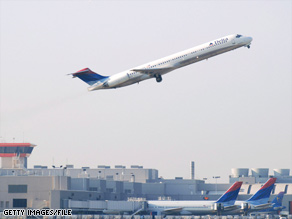 A drunk Delta passenger was placed in custody after he tried to light curtains on fire during a flight.

There was no apparent connection to terrorism, officials said.
Zoltan Lensky, 25, a Slovakian citizen, was on Delta Flight 40 from Atlanta, Georgia, to Vienna Wednesday night when flight attendants refused his request for more liquor.
According to TSA spokesman Christopher White, Lensky slapped a flight attendant on the hand, moved forward in the cabin, pulled out a lighter and tried to ignite the curtains around the flight attendants' rest area.
A federal air marshal on the flight arrested Lensky and put him in handcuffs, White said. Lensky was handed over to authorities in Vienna when the flight landed.
It is policy for air marshals never to fly alone. According to White, the other air marshal, or marshals, on the Delta flight remained undercover in case Lensky was being used as a diversion. However, "he was nothing but an intoxicated passenger," said White
Click to expand...

Staff member
Nothing but an intoxicated passenger that was going to set the curtain on fire, and endanger the rest of the aircraft.

So shampoo ok- no, lighters yes?? </scratchinghead> Is a monkey in charge?

TheWife said:
Is a monkey in charge?
Click to expand...

Does a bear poop in the woods?

When you cut me, do I not bleed?

Geez--it's almost like the gov't must be behind all this.

I thought FAMs are not supposed to identify themselves as such until breach of the cockpit is imminent.

Doug Taylor said:
Nothing but an intoxicated passenger that was going to set the curtain on fire, and endanger the rest of the aircraft.

I KNOW! I love how anything that isn't related to the GWOT (budget funding) is non-critical. This type of situation is FAR, FAR more likely to happen multiple times on aircraft, yet the TSA aren't interested because the guy wasn't affiliated with AQ.

Nick said:
I thought FAMs are not supposed to identify themselves as such until breach of the cockpit is imminent.
Click to expand...

The gritty details are certainly OPSEC, but I'll just state that law enforcement SOP is sometimes more fluid and discretionary than the FARs. I can almost guarantee that they operated within policy.