If anyone is interested, I found the following article on avweb.com. It looks like alternative fuels are possible, at least for light airplanes.

...And Tomorrow's Airplane Could Fly Gas-free
Meanwhile, in Worcester, Mass., a small group of entrepreneurs and engineering students is working to create an all-electric fuel-cell airplane. The ultimate goal: to fly with a hydrogen-powered fuel-cell system by 2004 -- quiet, efficient, emissions-free air travel. "If this were easy, somebody would have already done it," jokes Jim Dunn, executive director of the Foundation for Advancing Science and Technology Education (FASTec), the nonprofit group working in stages to develop the project, with help from NASA. The team is currently testing an electric motor mounted on a modified French DynAero Lafayette III two-seat kitplane, and recently began taxi tests. The next step will be to fly it with lithium ion batteries, perhaps as soon as this summer. The project will be on exhibit at Dayton's Inventing Flight celebration and at EAA AirVenture Oshkosh this summer.

The way I understand it, with the current technology, it's really not practical to use battery-electric motors on an airplane, since the batteries required for such an engine would weigh too much.

I was kind of excited about the whole diesel engine thing. Solves a dozen problems, not the least of which is the enthusiasm with which the EPA is trying to get rid of 100LL. Also, not having an electrical ignition system is nice, you don't need to deal with mixture, it burns JetA, or in a pinch you could put Kerosine in it, or plain old Diesel. Cost per operating hour is way down since TBO is much longer, and overhaul requires much less parts. Not to mention fuel consumption at cruise that is less then half of what a comparable Lycosaur burns.

Methinks that if they're looking for an alternative aircraft engine, there are much more logical trees to bark up then the battery-electric one.

The beauty of this is that they're just using the batteries until they have a hydrogen fuel cell.

Now, I'm no engineer, but I would think that by using hydrogen to fuel the plane instead of avgas you'd be able to put more weight in the "engine" since hydrogen doesn't add anything to the weight of the plane.

Sounds like a cool idea...and as practicle as anything else. The problem is this: until someone figures a way to make a clean silent replacement for the jet engine, fuel cell aircraft are only going to be limited to GA applications.

[ QUOTE ]
Now, I'm no engineer, but I would think that by using hydrogen to fuel the plane instead of avgas you'd be able to put more weight in the "engine" since hydrogen doesn't add anything to the weight of the plane.

Unfortunately in order for the aircraft to have any range, the hydrogen would have be kept in a liquid form, making it much heavier than it's gaseous form.

Now the problem becomes not so much weight as finding space in the airframe for all of this hydrogen...

Which is why aircraft like this have such large tanks:

The nicest thing about using hydrogen is that only about 1/3 of the weight needs to be carried to go as far as with jet fuel. The bad thing is trying to squeeze it all in.

Wasn't the Hindenburg filled with Hydrogen?? That worked out swell. 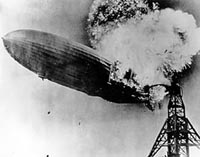 [ QUOTE ]
Wasn't the Hindenburg filled with Hydrogen?? That worked out swell.

Yes, and unfortunately that's one of the major things keeping hydrogen out of mainstream transportation. The public still has a very bad image embedded in their minds from the Hindenburg tragedy to this day. Needless to say, 100LL isn't exactly the safest stuff to have a spark around either, but people are just fine with that next to their head (as in a high-wing aircraft).

Obviously the containment and fueling have come a long way since 1937, and the fuel would be just as safe to use as gasoline. But convincing people that it's safe is the hard part.

Yeah, ya know I've actually seen people on the news asked about hydrogen fuel cells say: "I don't want to put anything explosive in my car".

It's not called an internal combustion engine for nothing you know (not you ready2fly...I think you already knew that).

People can be so thick sometimes.

In the 50's and 60's, GM, firestone, and one other company can't remember which, bought out most mass transit systems out here in the west. They dwinddled the service down to close to nothing and people simply did not have mass transit any longer and resorted to buying their products. There used to be a train line that ran all across the LA area well before my time, I forget the name, it went as far north as Indio, and as far south as Orange County, (I'm talking about a real rail system, and not this joke we call AMTRAK), it was simply bought out by these companies and broken apart.
They even took the companies to court on and and the companies lost the case, however the funny thing is they never made them rebuild the rail system because it was deemed too expensive, how convenient.

[ QUOTE ]
It's not called an internal combustion engine for nothing you know (not you ready2fly...I think you already knew that).

No offense taken. I was playing Devils' advocate.

GM would make just as much money selling us hydrogen powered cars as any other car. The question is could you afford it? It is not just a matter of making the car. In order to sell it at a cheap price you have to build thousands of them. Before you can even think of doing this you have to build a support system for your new vehicle.

You have to get it fueled somewhere. It would cost alot of money to build the support system for a new fuel source. New plants to make the fuel, new pipelines, new 'gas' stations, training service personnel to fix the new cars. It is not a matter of simply making a new vehicle and selling it. If you can't get fuel anywhere what good is it?

Gasoline is cheap and it is still available in vast quantities. New engines pollute very little, are very reliable and are well understood. Fossil fuel also has a very high energy density. Gas and Diesel have a tremendous amount of energy per pound and are easy to handle. They do not have to be chilled or compressed into liquid and they are not corrosive like methanol.

It is already possible to run internal combustion engines on propane. They require almost no modifications except a new 'carburator' or induction system. Propane has a very high octane number and pollutes little. It must also be compressed and carried in relatively heavy cylinders. Some cities power their police cars and buses with it, but it has not caught on. You cannot just pull in anywhere and fill up. If you get into an accident you have high pressure compressed gas that can spew out, instantly causing an explosive mix with air. Gas and diesel just drip out on the ground and diesel has a relatively high flash point.

New technology is promising, but it is not utopia. When oil is too expensive to be economical, new technology will replace it. Until then enjoy the sounds of radial engines and 60's muscle cars while you still can.

Actually, gasoline in a container is extremely stable. The vapors in a gasoline tank are too "rich" to burn. You could shoot sparks around inside a gasoline (or 100LL) tank all day long and never get it to blow up. Just don't let the tank vent. Then you'll have problems. Really the only time you might have problems fueling an airplane with 100LL is during the actual refueling, when the vapors haven't had a chance to build up yet. Once you put the cap on, it's safe as water.

Jet A, however, is a different story...