Audio from a UH-1 gunship mission in Vietnam

Shortly after I wrote GUTS N' GUNSHIPS, I discovered, through a perfect storm of events, an audio recording of my involvement in the extraction of American forces that were about to be overrun by thousands of enemy troops. This mission is described in the book. The following is a small excerpt of the actual radio transmissions
Click to expand...

The author of the above book is callsign Pigpen on that recording.

Brave ass dudes. Calm as could be.

Everything's green. Other than being on fire for a little while I'm okay.

Favorite part: "rockets or grenades or some (poop)."

I had a great uncle who was a Huey pilot in Vietnam. Downed twice. Never spoke of it much, and when he did as if it was no big deal. Did a career at Bell, retired maybe 2000ish, and passed away a few years ago. Afterward his son and daughter in law found his war records, citations, and medals. Unsung heroes, those guys.
A

There are just some amazing stories of the helicopter pilots in Vietnam and their various missions. This is one of my favorites:

In 1966, Second Lieutenant Larry Liss was on the Czech-German border during a snowstorm, freezing his varlata off, when he saw something beautiful. It was a Bell UH-1 helicopter, still on the ground. The pilot—who was wearing short sleeves and drinking a cup of coffee—took one look at Liss and shook his head. “He said, ‘You’re such a jerk’—he used other words; I’m trying to keep it clean—” recalls Liss more than 40 years later. “I said ‘Why?’ He said, ‘Look at you. You’re freezing your ass off, it’s snowing, look at me, I’m warm. You should sign up for helicopter training.’ ” So Liss did.

Four days later he was stateside. Because of a pilot shortage, the U.S. Army had created an accelerated training program: Four months primary instruction at Fort Wolters, followed by advance training at Fort Rucker. The first five hours were spent learning how to hover. “My whole class,” says Liss, “was able, after a couple of hours, to take the helicopter up to a hover. I was already in the ninth hour and still couldn’t hover. And you have to solo in 10 hours. So I’m beginning to panic.” Out of 84 pilots, Liss was ranked 82.

It was May 14, 1967, and Baca had just 12 days to go in-country when he and Liss get the call about a group of soldiers that needed rescuing. “We were the only helicopter there,” says Baca, “and they needed our help. We were not going to say no.” When they got to the coordinates, they realized there was no landing zone; tall bamboo covered the area where they were meant to set down. Baca and Liss decided that the lack of a landing zone wouldn’t slow them down: they decided to use the Huey’s rotor blades to slice through the bamboo canopy. “We were a lawnmower, basically,” recalls Baca. Fully aware that damage to the underside of the rotor blade could cripple their helicopter, the two carved out a landing zone and set down. They picked up six casualties and headed back to camp. On the 15-minute ride, they got another desperate message: The remaining men were pinned down by a battalion of 600 men, and the entire company needed rescuing. It took Baca and Liss, along with a second helicopter piloted by Swickard and engineer Al Croteau, 11 hours to evacuate the men. On their final run, the defense perimeter was under the rotor blades.

Also, an excellent documentary on the Huey and it's history in the Vietnam war:

Having lived and worked among men such as these, I forget what ancient history this is to the modern world ...

We build our lives on the foundation laid long ago by strong men and women. Some achieved more notice; most moved more quietly within the background of a different time.

My own life was molded by Bill Marquardt, an unremarked doughboy who shot an American Enfield from the trenches of World War I France, and returned home safely to have and raise the child who would become my mother; by Bob Ridpath (the first), a Lieutenant with the Army Corps of Engineers in World War II; Pat Blanchard, Sherman Tank commander with Patton's Third Army who lost most of one hand to the shrapnel of a German Eighty-eight; Gene Tigges, step-father, who flew left seat in a B-17 with the 8th Air Force for nineteen missions over France and Germany. There was Bud Hicks, waist gunner in a B-24; more famously, Walker "Bud" (in our home) Mahurin, - "Honest John" of World War II and Korea, Lieutenant General Glenn Kent ... Men who drank together, played tennis and golf, cooked awful pancakes at 2AM, and who protected the ideals of a Republic and bled for the freedom of others. There was Brent Lamour - Army Spec4, Joe Calvert - Air Force Buck Sergeant, Tech Sergeant White (who CERTAINLY had no first name), and Jimmy Melvin, friend and neighbor - Marine Lance Corporal who died in the Quang Tri Province of Viet Nam, a genuine hero. Men (and in our world today, women) whose service, sacrifce, accomplishments and valor are often forgotten.

There are unknown Pigpens and Waldos and Slick Pilots about whom we rarely think, and only occasionally remember, who helped form the lives of uncounted thousands by their faithful duty . Some embraced death, that others might live; nearly all were changed personally by the sacrifice their faithful service required.

They move among us today, of course, with a contribution and personal cost which is no less significant. Some stand watch in, or high above, lonely deserts; others watch with wary eyes across the mountains of a DMZ. They walk lonely beats on dark city streets, and drag heavy hoselines into the hell of burning homes. Loving life, they die for others - or live with scars, forever changed - by the burst of an IED, the muzzle flash of a assassin's gun, the white heat of a flashover or slow death of entrapment in a structural collapse.

I know I have posted this video on here once before, but I like it so much, I'm posting it up again:

Thanks, just read some reviews on Amazon and ordered a copy.

Staff member
What a coincidence. I'm in the middle of reading that book right now.... 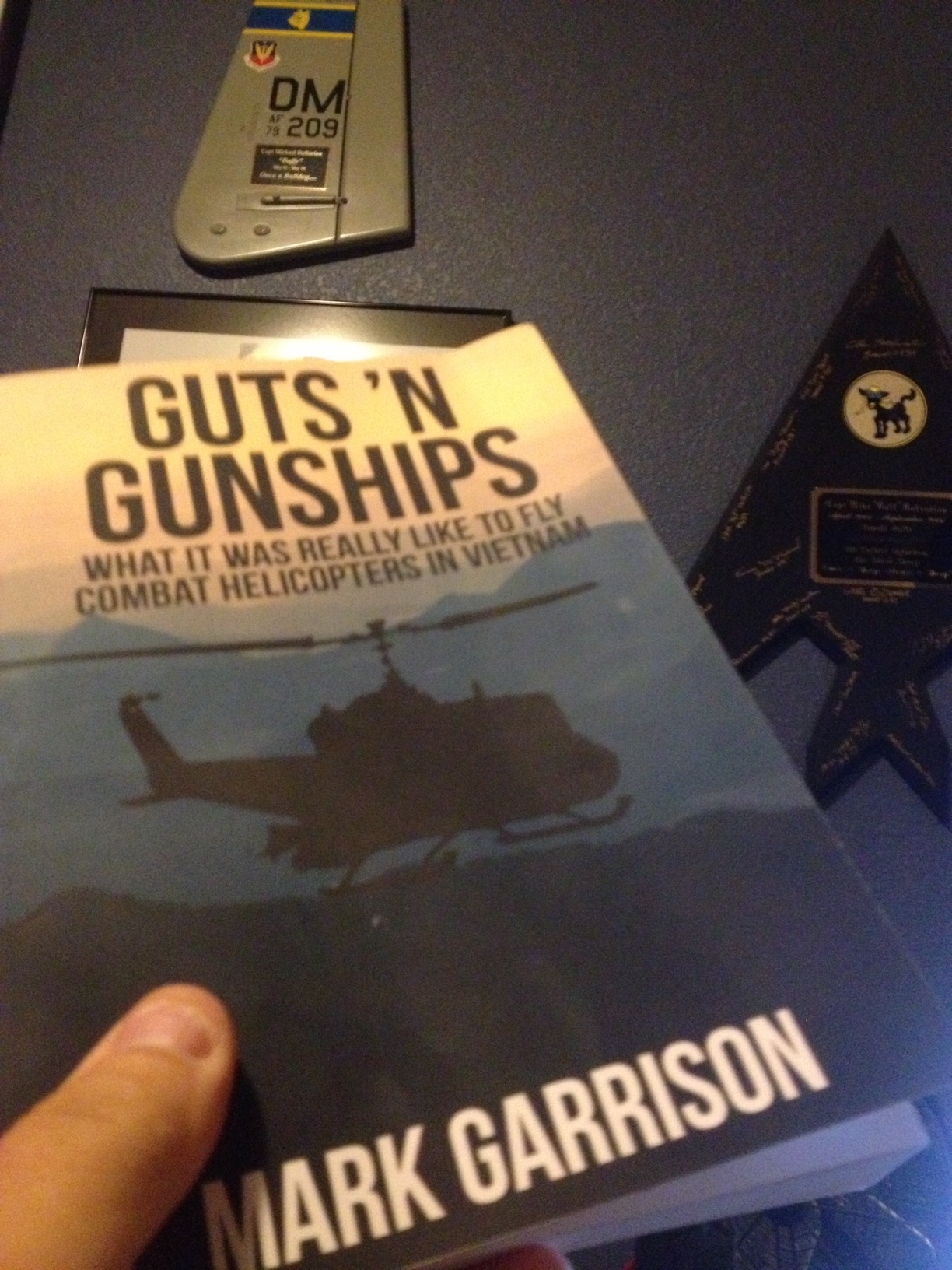 I'm always amazed those guys flew in such close formation with so many ships without running into each other.

Murdoughnut said:
I'm always amazed those guys flew in such close formation with so many ships without running into each other.
Click to expand...

You really have to watch the ship ahead of you. With the corner of your eye, you watch the rest of the formation.
If you don't watch your rate of closure, it can result in a chain reaction "whoa-boy." Picture a horse rearing up.

There is nothing sexier, to me anyway, than a formation breaking ground at the same time.

My uncle was a door gunner in the 101st... He has lots of stories, and I've had the pleasure of hearing many of them over the years. Shot down 3 separate times. Flew a few missions in support of special forces and recon teams. Those guys must have had a wheelbarrow to carry around their giant brass balls.

Just running in to a burning house...

With the obvious proviso that I'm not a whirlygigger myself, I've spent some time around that rabble. From what I can discern, some of the approaches (and departures) those dudes did back then in the *STOCK FOR PUBLIC CONSUMPTION* films would be considered "time to go hug yourself" MADNESS today. And that's just what was edited down for the masses. There was one old badass at my base who was just too close to retirement to give a poop anymore, and he'd sort of approximate a, what, "combat departure" (ONLY when empty). It was something to see...I'm not sure the light stanchions have paint from the skids on them, but I'm not sure they don't, either...

For me, just riding along with the more sedate fellows was frightening enough. I mean, poop, there are buildings over there and electric wires over here and how far away is that tree, anyway!!!??? And that's minus a bunch of pissed-off victims of colonialism trying to score one for the Oppressed Masses from that tree line over there. *Hat 100% off* For a lot of dudes, their "fantasy former life" is being a P-51 pilot over the Reich or a Sabre pilot in MIG Alley. Me? Huey pilot, Vietnam. I mean, that's obviously leaving aside the moral justification questions regarding that particular war, etc. But for sheer badassery...

Anyway, thanks for posting. Good stuff.

I may have read this book.


I may have read this book.
Click to expand...

Well I'd hope so.

Snake Driver is another good one. Kinda gets the other side of the crazy pink team equation with LLH covering the crazy scout guys and SD covering the gunships that were perched above ready to cover with a barrage of unguided rockets and mini gun fire.

Having flown gunship cover for scouts, the simple idea of bring fire that close that fast is just crazy. We simply cannot do what those guys did. We don't do it often enough.

milleR said:
This is outstanding.

I had a professor at my local community college who flew for the SeaWolves. His face lit up when he realized I knew what the hell he was talking about. Cool guy.


Lawman said:
Well I'd hope so.

Snake Driver is another good one. Kinda gets the other side of the crazy pink team equation with LLH covering the crazy scout guys and SD covering the gunships that were perched above ready to cover with a barrage of unguided rockets and mini gun fire.

Having flown gunship cover for scouts, the simple idea of bring fire that close that fast is just crazy. We simply cannot do what those guys did. We don't do it often enough.
Click to expand...