Just off the news... 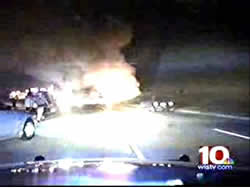 Hospital officials confirmed that Travis Barker, who also starred in MTV reality show "Meet the Barkers", was among those hurt. He was transported to a burn center in Augusta, Georgia, where he was listed in critical condition on Saturday morning.

Barker had performed Friday night at an event alongside Perry Farrell, the former Jane's Addiction singer, as well as Gavin DeGraw and DJ AM.
Click to expand...

RIP for the 4 that did not make it, including the two pilots.

Looks like it had just come out of MX at TEB.

They were heading to my home...KVNY (Van Nuys). This sucks. It is hard to talk about but reports say that Barker and DJ AM were thrown from the plane and on fire resting on the embankment.

They had just played a show with Perry Farrell (Janes Addiction) There is no word yet if he was among of the dead.

Just found out about this....

crazy.... so no word on what happened so far right?

RIP. Looks like Travis and DJ AM are going to make it but still in serious condition.

From those Pictures, Someone upstairs wants them alive! RIP

RIP, hope travis and the other guy pull through.

Travis Barker just died according to a news thing I just heard.

Update: checked other sites and no one else had it listed so it could be bad information...

I haven't seen anything of the sort..where do you get this info?

When I did a web search there was a TMZ thing (not exactly reliable) that said they had just learned that DJ AM was in surgery and Travis was dead. I would think that is something all the major outlets would put out there though. I am questioning if it is legit...should have done that before the post sorry

TMZ.com is reporting nothing of the sort. The hospital will issue an update on their condition at 0900 EDT.

It was a news bulletin that had the TMZ logo on it that said word was just in from associated press that Travis Barker had died. My husband was playing WoW and the one guy on there said he was just informed of the death by TMZ so I googled it and the same message came up so I thought it was possible.

As I did a search I couldn't find anything more on it...so I do think it was erroneous. Sorry

and then posted, I should have verified first though.

RIP...some pilots out here in Moscow knew Sarah. Very Tragic. Let's not rush to judgement until we know more of what happened.

I don't see how they must have been launched form the plane, I wonder in what seats they were sitting?